Job control is a feature of most shells which can often be somewhat complicated to work with. However, knowing the basics can help prevent you from getting yourself into a tangle and can from time to time make certain tasks a little easier.

What Is Job Control?​

Let's start with an example. I am building a simple web page. It has one index.html file, one styles.css file, and one code.js file. The index.html file looks like this:

Opening the file in a browser doesn't quite work, as it won't load the code or the styles. We need a web server to serve styles and code.

A super-useful one-liner to run a web server on any machine with Python installed is:

In fact, this is so useful that I normally alias this command, so that I can just type serve. We'll see aliases in a later chapter.

Make sure you have the samples folder downloaded.

Run the following command in your shell to download the samples:

Now run the following commands to open the webpage:

For now, if we run this command, then we can open the webpage in a browser, with the styles and code loaded:

We can also see that the server has served the HTML, JavaScript, and CSS files, this is clear from the output of the Python command we ran:

All well and good so far. But if you try and use the shell to do something else, you will encounter a problem, let’s take a look.

Let's say we want to now continue using our shell, maybe to edit the website with a terminal editor like Vim or Emacs, or we want to zip up the site, or just run any shell command1.

We have a problem. The python process is still running - it's serving the website. Our shell is essentially useless, until we stop the server. See what happens when I try to edit a file:

In the example above, I try to run vi, but nothing is happening. Standard input is not being read by the server and not being interpreted by the shell.

I have to kill the server by hitting Ctrl+C. This sends a SIGINT signal (which tells the command to stop). We saw signals briefly in Chapter 4 - Becoming a Clipboard Gymnast and we'll see more of them in as we continue. Now I need to clear my screen to get rid of all of the error messages, then start again.

This is obviously not optimal. Let's look at some solutions.

Solution 1: Start the Server in the Background​

In most shells, you can run a command and instruct the shell to run it in the background. To do this, you end the line with an ampersand. Here's how the example would look in this case:

In slightly obtuse language, the shell has informed us that it has started a job in the background, with job number 1 and that this job is currently handling the process with ID 19372.

The ampersand solution is a fairly common pattern used in day-to-day work. The process is in the background and our shell is available for us to use as normal, the web server will continue to run in the background.

Solution 2: Move the Server to the Background​

Let's say you forgot to start the command in the background. Most likely in this case you'd kill the server with Ctrl+C and then start it again with the & option. However, what if this was a large file download or a task you didn't want to abort?

In the example below, we'll move the job to the background:

The process is currently in the foreground, so my shell is inactive. Hitting Ctrl+Z sends a 'suspend' signal to the process3, pausing it and moving it to the background.

The shell echos as I type, so we see ^Z (i.e., the Ctrl+Z chord I entered). The shell responds by moving the process into a background job and suspending it.

The key here is that it is suspended. The process is paused. So the web server is no longer serving. If you are following with the sample, reload your browser. The webpage fails to load, as the server process is not able to respond to requests.

The shell lets us know the job is being continued, and if we load the webpage again, the content is shown as expected.

As a final check, we run the jobs command to see what jobs the shell is running:

And there you have it - our server is running as a background job. This is exactly what we would see if we run jobs after starting the server with an & at the end. In fact, using an & is perhaps an easier way to remember how to continue a suspended job:

There is at least one more way to move a job to the background4, but I have not yet found it useful in any scenarios, and it is overly complex to explain. See the footnote for details if you are interested.

Moving Background Jobs to the Foreground​

If you have a job in the background, you can bring it back to the foreground with the fg ('foreground') command. Let's show the jobs, with the jobs command:

Here I have a background job running a server. Any one of the following commands will bring it back to the foreground:

Now the job is in the foreground, and you can interact with the process again however you like.

You might realise you cannot continue what you are doing because an old job is still running. Here's an example:

I tried to run my web server, but there was still one running as a background job. The server failed to start because the port is in use.

To clean it up, I run the jobs command to list the jobs:

There's my old web server. Note that even though it is suspended, it'll still be blocking the port it is serving on5. The process is paused, but it is still holding onto all of the resources it is using.

Now that I know the job identifier (%1 in this case), I can kill the job:

Why You Shouldn't Use Jobs​

Avoid jobs. They are not intuitive to interface with and they suffer from some challenges.

The most obvious one is that all jobs write to the same output, meaning you can quickly get garbled output like this: 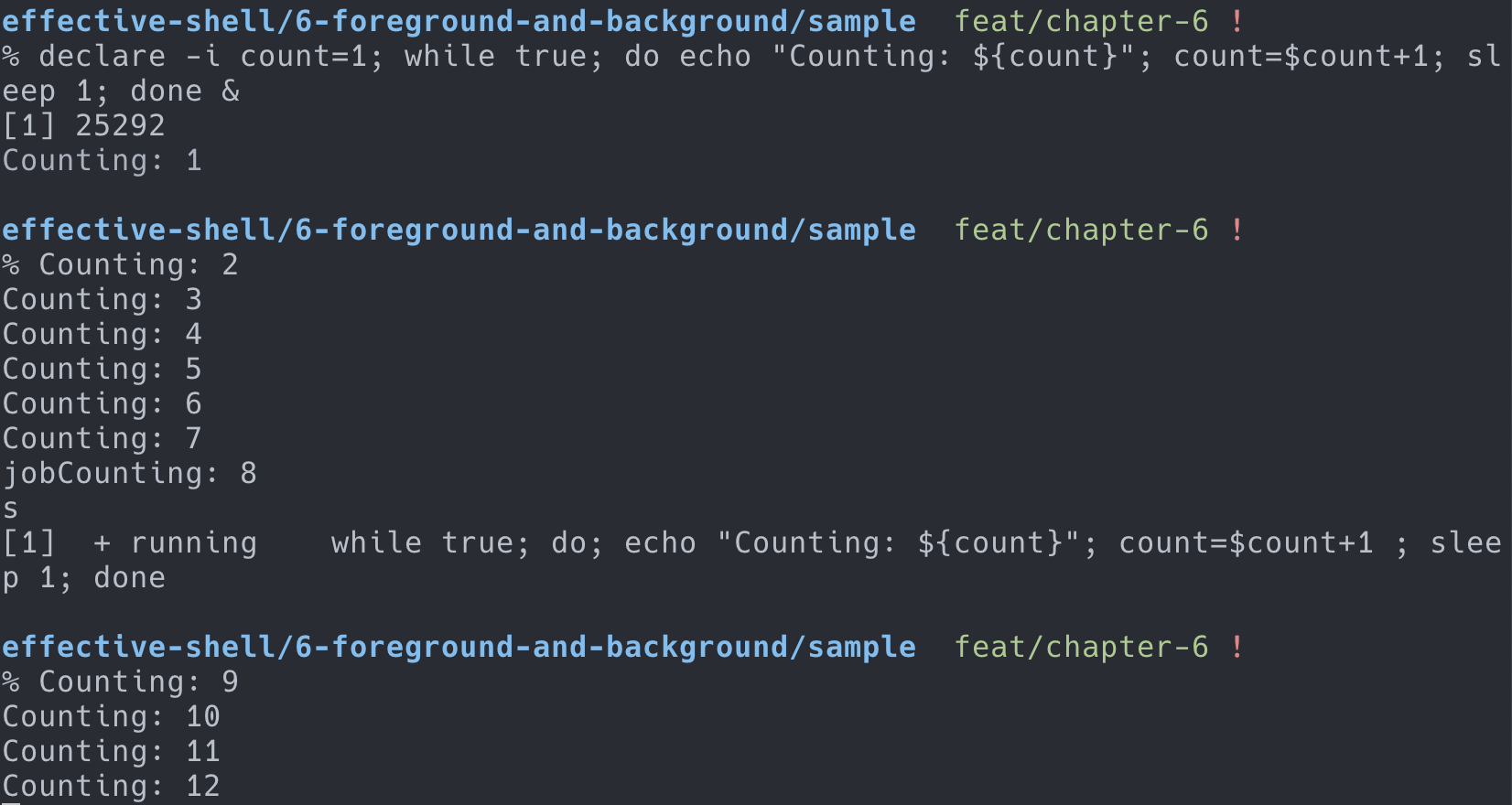 This is what happens when I run a job, which just outputs text every second. It's in the background, but it's printing all over my commands. Even running the jobs command to try and find the job to stop it is difficult.

Input is even more complex. If a job is running in the background, but requires input, it will be silently suspended. This can cause confusion.

Jobs can be used in scripts but must be done so with caution and could easily confuse a consumer of the script if they leave background jobs hanging around, which cannot be easily cleaned up7.

If jobs should be avoided, why discuss them at all? Well sometimes you move things into the background by mistake, sometimes it can be useful to quickly shift a download or slow command into the background, and also if you are going to avoid something it's good to know why! And the challenge of managing multiple units of work on a computer has been around for a long, long time, with jobs as one of the tools in the toolkit to deal with the challenge.

But given I'd suggest to avoid jobs, let's summarise with the most key takeaways and some alternatives.

The Most Key Takeaways​

If there are two things to take away, they would be:

If you have started running a command in the foreground, and you don't want to stop it and would rather move it to the background, hit Ctrl+Z. Then Google "job control".

If you think there is a job running in the background, and it is messing with your screen, type fg to bring it to the front and kill it with Ctrl+C. Repeat as needed!

In either case, if you need to do something more subtle, you can return to this reference. But the first command should allow you to get your shell back while you work out how to continue the job, and the second should kill a background job that is messing with your screen.

If you are using any kind of modern terminal such as iTerm, Terminal or the GNOME Terminal, just open a new tab or split! Much easier.

The benefit to this is that each tab gets its own standard input and output, so there's no risk of overwriting. And of course you can hide/reveal/rearrange the tabs however you like.

The traditional alternative to a job for an operator who simply wants more than one thing going on at once would be a terminal multiplexer, such as screen or tmux:

Multiplexers work in a very similar way to a modern graphical terminal - they manage many shell instances. But there are some differences.

Modern terminals, such as iTerm, tend to have more intuitive GUIs and a lot of features. Multiplexers can be stateful - and manage work even when you close the shell (allowing you to 're-attach' later. We can also run them over SSH sessions to manage complex operations on remote machines. They run a client-server model, meaning many people can work with many multiplexed processes (and they can persist beyond sessions).

My personal preference is both - I use a modern terminal and run everything inside it in tmux, which is a very common multiplexer (and in some ways the spiritual successor to screen, an older multiplexer). We'll look at both of these options in later chapters.